How ectopic pregnancy took away my chance of being a mom

- January 20, 2020
Ectopic pregnancy is the worst thing that ever happened to me. It was October 14, 2016, a few days after I got my Big Fat Positive. I was overwhelmed with excitement because I am pregnant again. (My first pregnancy ended up in miscarriage at 15 weeks, almost a year later.) But then I had some spotting and though it was almost nothing at all, the fact that I miscarried with my first scared and alarmed me, so I rendered a half day at work and went for a checkup. The sonographer didn't see anything inside my uterus instead she said that there's some fluid. I was told to undergo operation immediately for it is an ectopic and it would be dangerous for me if it would burst that it would cause my life. I was devastated, they took my right fallopian tube. The doctor told me not to worry for I can still get pregnant with one tube. Although I'm sad for the mere fact that I lost my baby again, I saw a ray of hope. Two years later, I got a positive  pregnancy. I again prayed and hope that this time I would see my rainbow baby but then something I never imagined happened. I had spotting again so I went for a checkup, I told the doctor that I had miscarried with my first pregnancy and ectopic on the second so she would have an idea that there is a risk of another miscarriage or ectopic for me, but then she just prescribed me medicines and supplement (progesterone pills and duvatrene). She told me to come back after two weeks. I asked her for an ultrasound but she told me it's too early and have it later just before the follow up check up. The following days were very crucial to me because the spotting did not stop instead it became worse. The blood became more bright red and fresher with small lumps of blood. I was scared that I was miscarrying. There were times that I almost faint. A week has passed and I decided to have the ultrasound. The time I spent inside the ultrasound room was horrible. The sonographer can't see anything inside my uterus but instead feel a hard mass in my lower left abdomen. It seemed forever and I'm getting nervous and uneasy. The moment she told me it must be another ectopic, my tears fell. I already knew what that means. I wanted to scream and cry hard but I restrained myself. When my husband asked me what was the result of the ultrasound, I calmly told him that it was another ectopic and I need to be operated on immediately. He saw that I was just controlling my tears. I was told that my remaining tube might not be saved if it was ruptured already and I was sure that it was because it's almost 7 weeks (my first was only 5 weeks and it was already ruptured), so I told my husband about it and he was furious. He said that if only the doctor told me to have that ultrasound the day I checked in, my tube could have been saved because it's still early. But I told him, there's no use to be angry, everything has already happened. I was in the operating room for almost 2 hours, I was awake the whole time they were operating on me. I'm chilling, teeth clenching and half of my body was shivering as a result of the anesthesia. I didn't know what should I feel, there I was, my life's at risk, my remaining tube was ruptured and severely damaged. The baby's remains extended up to my bladder and intestines. The doctor was talking to me saying that she could no longer save it but it's as if I'm not hearing anything. All I know at that moment was that,not only did I lose my baby but I also lost the chance of bearing another baby and give birth to a child. My hope, my dream of hearing someone calling me mom, a small hand holding mine, those sweet little kisses and warm hugs and all were gone. 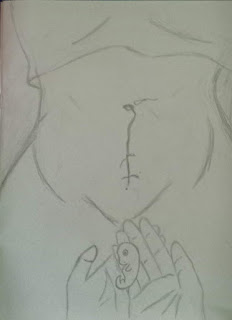 Popular posts from this blog

- January 18, 2020
https://www.facebook.com/pg/ectopicmama/posts I dreamt of seeing you on foot, instead you developed wings and fly away from us I imagined your voice but instead I can hear you whispering a prayer from up above. I'm sorry that we lost you, I'm sorry my body's weak. I'm sorry I misled you, so they had to take you away. I'm sorry you had to leave before coming to this world. You are our seed, our bean, our pickle. You are our dream, our hope, our joy. We've been together in one body, you breathe through me. I felt you the moment you were there. I imagined your smile, your cry, your laughs. I smiled thinking of your voice, your hugs, your touch. I dreamt of your little hands, your feet, your sweet little eyes. I'm sorry, it seems not fair. My little angel I'll forever miss to hold you dear.
Read more

- July 04, 2020
Drip drop drip drop! It's raining cats and dogs. Suddenly dark clouds covered the clear sky. She froze as she looked out the window while witnessing the sudden change of weather then she went back to the living room and continue in watching her favorite sitcom. The scenes were funny and hilarious but she felt her heart hurt. She fought the urge to cry but the hole inside her widen and went deeper. She can't fight it, no! her tears welled down. It's been months now since that feeling visited her again. She would ignore and set it aside but it keeps coming back. The feeling of being unwanted, alone, of being unworthy of anything, of being unloved, no value and her existence isn't important to anyone and has no bearing to the world. She would fight that feeling every day as she wakes up without motivation to move nor to do anything. But then half of her insists that she should continue on living. She obliged herself to function and move on but that feeling never stop. It c
Read more

crisdiwata
I am an introvert and can stay at home 24/7 even without internet as long as I have a pen and paper with me. I love writing poems and short stories especially when I'm in a euphoria and at most in my lowest points. I love knowing people, love travelling and knowing different cultures.